While she’s seemingly giving a lot of ladies a run for their money, this viral Togolese TikTok star is stealing the hearts of a lot of Nigerian men.
The name “Kelly” has become a familiar one amongst Nigerian men. Quite a number of them who were not even TikTok users, suddenly became users of the app after seeing videos of the dark-skinned beauty on social media. 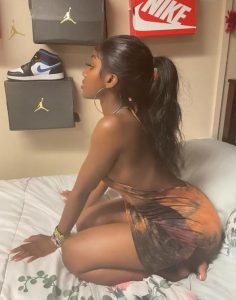 With username @bhadie.kellyy, the youngster is a Togolese Tiktoker who makes short videos of herself, most of which features her twerking in skimpy and figure hugging dresses.

A quick check on her page shows she began making videos on TikTok since November of 2021 but ever since she became a viral sensation amongst Nigerian, her videos have been amassing an average of 1 million views per video.

Due to her becoming a viral sensation on the app, her followers skyrocketed from over 300k followers to over 900k and counting in only a couple of days.