International model, Naomi Campbell has called out the Recording Academy for ignoring Wizkid at the 64th Grammy awards.
Wizkid lost his two nominations for Best Global Music Album and Performance on Sunday night.

According to Naomi, ‘Essence’ by Wizkid was nominated in the wrong category for the Grammy award and should have been nominated for the Song of the Year category.

She accused the Grammy of ignoring millions of people by not giving Afrobeats enough recognition, adding that ‘Made in Lagos’ by Wizkid was beyond a phenomenal album. 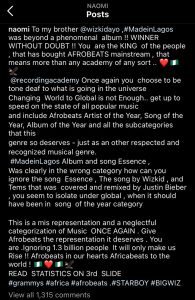 Nigerian Producer Rexxie Sets Record, Becomes The First Nigerian To Win Back To Back Grammy

LET’s TALK!!! As An Artiste, A Chance To Feature In FIFA World Cup Song Vs A Grammy Award – Which Will You Go For?